All Countries and Territories with Active Zika Virus Transmission 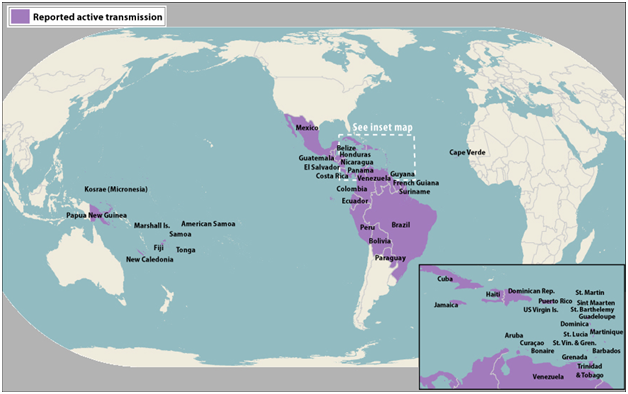 CCDM now available as online subscription, in addition to print, mobile and Web

Washington, D.C., May 11, 2016 — A new chapter on the Zika virus updates the latest edition of the “Control of Communicable Diseases Manual,” or “CCDM,” the leading sourcebook on identifying and controlling infectious disease.

Available exclusively in a new online edition, the chapter identifies clinical features of the virus, including signs and symptoms of Zika virus infection and possible complications such as rare neurological effects and congenital birth defects. The chapter provides information about disease diagnosis, range of occurrence, incubation period, risk groups and modes of transmission such as via mosquito vector, intrauterine transmission and sexual transmission, among other documented routes. The text also includes guidance on preventing the spread of Zika, management of the patient and patient contacts, and reporting requirements.

“The emergence of the Zika virus is among the most troubling developments of the early 21st century,” said David Heymann, MD, global infectious disease expert and editor of “CCDM,” which is published by APHA Press from the American Public Health Association. “We have taken great measures to develop expert guidance based on the latest science to help public health professionals and affected communities prepare for and respond to this threat.”

The Zika chapter updates the venerable reference book, which now contains key information about the occurrence, transmission and control of more than 130 infectious diseases globally. While the full manual is available in print and for mobile and Web, the Zika virus chapter is only available as part of the online subscription.

“As mosquito season looms in the northern hemisphere, this key update to ‘CCDM’ couldn’t be more timely,” said Georges C. Benjamin, MD, executive director of APHA and editorial board member of “CCDM.” “This new standalone Zika chapter puts the latest knowledge at the fingertips of the people who are on the frontlines of controlling disease.”

The online subscription provides access to full text of chapters with links to references and resources. Digital subscribers have access to new and revised chapters as they become available; up to one-third of the book will be updated each year. An image and video bank will soon be added along with other dynamic content. Digital subscriptions are available for individuals and institutions.

The Zika chapter was written for “CCDM” by Fernando Bozza, MD, PhD, of the Oswaldo Cruz Foundation, known as FIOCRUZ; and Ernesto T. Marques Jr., MD, PhD, of the University of Pittsburgh Graduate School of Public Health.

It was a 2009 complaint to a New Jersey local health official from a resident about seeing smoking inside of a mall that set the state Legislature on a path to electronic cigarette regulations.

While the complaint turned out to involve e-cigarettes, not tobacco, it raised awareness of the state’s existing Smoke Free Air Act, which banned cigarette use indoors. In 2010, state lawmakers were prompted to ban people from using e-cigarettes inside public places.

“It raised awareness that this was a new technology of an old problem,” said Mary O’Dowd, MPH, New Jersey’s state health commissioner. “To the credit of those (legislators) at the time, they quickly incorporated it into our existing law so that this was not a way to get around the law.”

Dozens of states are passing legislation to regulate e-cigarettes as the Food and Drug Administration continues its quest to gain authority over the products.

In April 2014, FDA proposed a rule that would extend its regulatory authority over unregulated tobacco products, such as e-cigarettes and water pipe tobacco — also known as hookah. The rule, still yet to be finalized, would allow FDA to create and enforce regulations, such as age restrictions on use of newly deemed or regulated products.

As states continue to pass laws regulating e-cigarettes, health officials have been able to draw from an increasing body of scientific evidence about the health effects of their use.

U.S. poison call centers saw a spike in calls in recent years due to exposure to the liquids inside e-cigarettes, according to an April 2014 MMWR study. The number of exposure calls jumped from one per month in September 2010 to more than 200 a month by February 2014, the study said. Just over half of those calls involved kids younger than age 5 who either inhaled the liquid, consumed it or absorbed it through their skin or eyes.

In California, for example, the number of poison control center calls involving e-cigarette exposure to children ages 5 and younger increased from seven in 2012 to 154 by 2013, according to “State Health Officer’s Report on E-Cigarettes: A Community Health Threat,” a report released in January by the California Department of Public Health.

Additionally, the aerosol released from e-cigarettes has been found to have at least 10 chemicals, such as benzene and cadmium, that are on a state list of chemicals known to cause birth defects and cancer, the report said.

“Overall, research confirms that e-cigarettes are not emission-free and their pollutants could be of health concern for both users and those exposed to the secondhand aerosol,” the report said. “Although it may not be as dangerous as secondhand smoke from cigarettes, people passively exposed to e-cigarette aerosol absorb nicotine at levels comparable to passive smokers.”

Slate of Officers/Board Members due from Nominating Committee

Slate of Officers/Board Members due from Nominating Committee